NEW | Discover our Christmas shop ! Step into the Grand Hotel Kusmi and discover our gifts ideas

How to choose the right green tea?

While the French have long consumed more black tea than green tea, the trend is now reversing. Green tea is becoming increasingly popular. Test it around you, you'll see! Whether for yourself or as a gift, we tell you which green tea to choose.

Green tea has been drunk in Asia for thousands of years. Having taken the world by storm (tea is the second most consumed beverage after water), green tea continues to ride the trend. And for good reason: it appeals for its image as a healthy drink with many virtues.

Japan, India, China, Sri Lanka... Wherever it is produced on the planet, green tea is a tea whose natural oxidation is stopped after picking. The leaves of the tea plant are dried in order to interrupt the natural fermentation process. After being withered, rolled to extract the juices, the leaves are exposed to heat, in order to be "seared" and to keep their properties intact. The tea leaves are then sifted to remove stems and dust before being packed in tins or bags. They are then ready to be brewed.

What are the benefits of green tea? 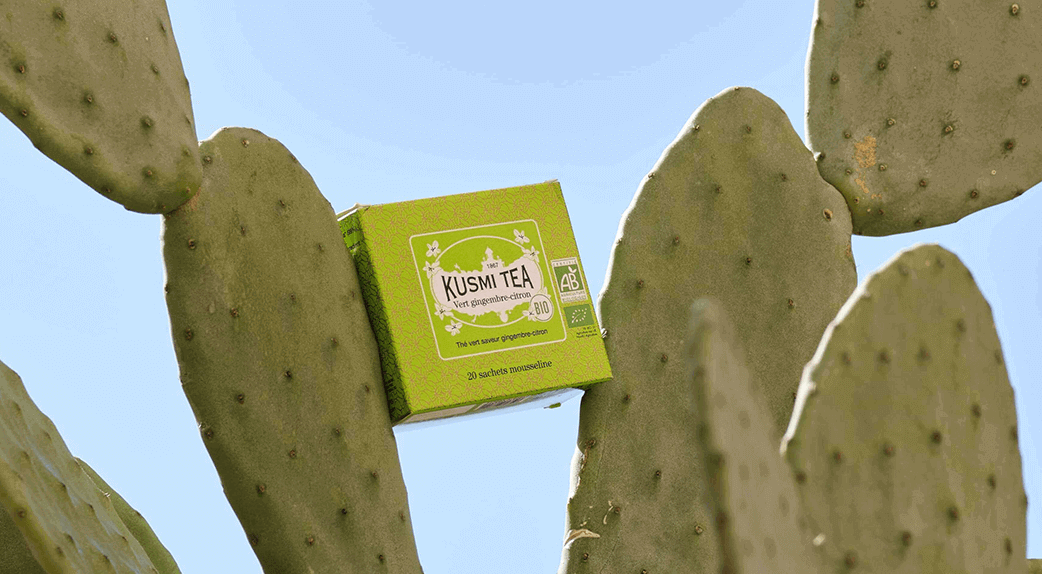 Traditional Japanese medicine has long observed the benefits of green tea. With the highest life expectancy in the world, regular consumption of green tea is one of the many reasons given for this. Green tea is the tea with the highest antioxidant content, as its oxidation has been stopped quickly. Its high content of polyphenols (also known as catechins) is thought to help strengthen the immune system, fight ageing and encourage weight loss. In addition, the presence of theanine is believed to reduce stress, providing a relaxing effect.

What is the best green tea?

Japanese green tea is particularly popular. There are several reasons for this. Firstly, because the Japanese method, which stops oxidation by steaming, is said to preserve the properties and flavour of the tea leaves better. Secondly, because the entire country has elevated tea drinking to the status of a true art, with the tea ceremony giving it its letters of nobility. Finally, because domestic demand is strong and the country is more occupied by large megacities than by tea bushes, exports remain limited. This makes Japanese green tea rare and therefore more expensive on average than Chinese or Indian tea.

Which green teas are the most famous?

In every tea-producing country, there are ordinary, everyday teas, but also exceptional teas, consumed on special occasions. This is the case, in Japan, of the green tea "Gyokuro" ("Pearl of Dew"). What makes it special? It is a "shadow tea". Tarpaulins are placed over the plants a few weeks before plucking, which increases their chlorophyll content. The result is a very mild, seaweed-like taste that is much appreciated by the Japanese. Another green tea that is very famous in Japan is Matcha tea, which is the subject of grandiose ceremonies. This emerald green powder is whipped in a bowl until it foams. In China, two green teas stand out. Organic Long Jing, also known as "Dragon's Well". Harvested in the spring and with its light notes of hazelnut and chestnut make its taste very popular with tea lovers. Finally, the green tea Perles de Jade is made of silver buds scented with jasmine petals. A symbol of refinement, Jade Pearls are surprising: they are brewed not once, not twice... but up to 5 or 6 times in a row.

How to prepare your green tea ?

Which teapot to choose for green tea?

If you drink not only green tea, but also white or black tea, you will have to choose a teapot without memory, which is the case for the vast majority of teapots (glass, cast iron, ceramic, etc.). Only unglazed clay teapots retain the aromas from one infusion to the next. They are only recommended if you always drink the same tea, as the tannins of the black tea, encrusted on its walls, could overpower the delicacy of the green tea. For more information, please consult our teapot guide.

How long should green tea be brewed?

Experts recommend a brewing time of 5 to 8 minutes. Not steeped enough? Green teas can be bland, lacking in flavour. Too steeped? It can be too astringent and bitter. Put the tea in hot water, but not boiling: between 70 and 80 degrees. A higher brewing temperature will damage the tea leaves and reduce the strength of the flavours and the presence of vitamins. As not all green teas are the same, and some are blended with other flavours, it is easiest to follow the recommendations on the tea box.

When should I drink green tea?

Green tea can be enjoyed at any time of the day. In the morning, at breakfast, for brunch, but also for tea time, or to boost your energy and refocus your mind at the end of the day. It can be enjoyed in summer or winter, either hot or iced. To do this, let it steep in hot water before cooling it down with ice cubes, then add peach wedges, lemon slices or mint leaves according to your preference.

Yes and no, and mostly "it depends". Just like the effect of caffeine, the effect of theine is different for everyone. Some people will say that it is impossible to fall asleep if they have drunk green tea after 5 pm, others will sleep like babies. If you are one of those people who are sensitive to theine, we advise you to opt for white tea at the end of the day, which contains less theine, or for infusions. Some will even help you fall asleep...

Which Kusmi organic green tea is right for me?

Would you like to be surprised by an unknown green tea? Here are the different green tea blends offered by Kusmi. The good news is that they are all organic, flavoured and packaged in France in an ecologically responsible way.

Kusmi has chosen to go organic. Whether it is the tea, the plants, the spices... all the ingredients are organically grown and certified by strict specifications established by the European Union. Regular checks and analyses are carried out to ensure that the quality standards are respected. This allows us to be certified by Ecocert, an independent organisation that carries out an annual audit of our production workshops. All these steps allow our tea boxes to bear the AB logo for France and the Eurofeuille logo for the European Union. The aim is to provide consumers with the best possible information on the quality of our products.

Like all our other teas and infusions, Kusmi Tea green teas are based on French know-how. Although the name Kusmi comes from Russia, it is in Normandy that our brand (which became French in 2003) thinks, creates, blends, flavours and packages the tea. More precisely in Saint-Vigor d'Ymonville, near Le Havre, in Seine-Maritime. Our metal tins are also made in France. Because fewer kilometres means less pollution and more work in our regions. If you want to support the economy made in France, you have come to the right place!

Kusmi Tea is committed to recycling and reducing waste for both our loose and bagged teas. Our loose organic teas are packaged in metal tins, a material that can be recycled ad infinitum. Our tea bags are made in France from polylactic acid (PLA), a biosourced and 100% biodegradable material, before being placed in recyclable cardboard boxes.

While Kusmi Tea offers a dozen blends of flavoured green tea (fruity, exotic, flowery, spicy...), we present here the plain green teas that form the basis of all our recipes. The good news is that they are available in bulk (because it's good for the planet!) and in bags to follow you wherever you go.

Originally from the Chinese province of Zhejiang, Gunpowder is traditionally used to prepare mint tea. Its leaves are dried after harvesting to prevent fermentation and then rolled into a ball shape - hence the name 'gunpowder'.

Grown in the mountainous region of Darjeeling in India for over 150 years, the tea plants grow in the alternating rain and sunshine and the moisture contained in the mist. Since this region produces only extremely small volumes annually, Darjeeling tea is a true luxury product.

Discover Genmaicha organic tea, an atypical blend of Japanese Sencha green tea with roasted and puffed rice grains. The freshness of the green tea combined with the pronounced flavour of the rice grains, which bring a slight taste of hazelnut, make this blend an ideal ally for a relaxing and gourmet break.

This is the green tea of everyday life, a must in the land of the Rising Sun, where it was born nearly 300 years ago. In your cup, Organic Sencha Green tea takes on a light hue and offers refreshing iodine accents. A subtle aroma with herbal notes, reminiscent of the scent of freshly cut grass.

Also known as "Dragon's Well", this green tea is harvested in the spring near the city of Hangzhou in China. Legend has it that in the village where this tea originated, there was a well that always gave out water even in times of drought. Its secret? The dragon that lived there. Very different from the western dragon, the dragon is a strong symbol of Chinese mythology: it lives in water and represents strength, happiness and benevolence.

Grown on the island of Kyushu ("the island of volcanoes") in south-western Japan, this tea flourishes in a tropical climate, which is what makes it so special. Roasted at a very high temperature, the tea leaves take on a lovely brown hue and once infused offer a woody attack and roasted notes. A pure delight!

For more than a hundred years, in south-east China, a know-how has been passed on: the meticulous shaping of Chinese green tea into delicate little pearls, ready to be brewed. The silvery buds of this organic green tea are scented with freshly picked jasmine petals. They are then rolled up, shoot by shoot, pearl by pearl. A real work of art!

Originating from Japan, organic Matcha green tea is rare and unique. Only the most beautiful leaves are picked with the greatest care. Then they are dried flat, before being delicately ground into a fine powder between two granite blocks. A real work of art! As for its emerald green colour, it is inimitable.  What you need to know is that it is the only tea whose leaf is entirely absorbed by water. So it is the very essence of the tea that you drink, not just the infusion! With an incomparable sensation in the mouth!

Would you like to discover the criteria for identifying a quality green tea? Click here to find out.